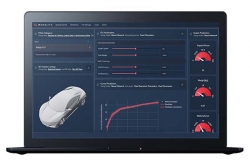 Monolith AI has announced at the expo that engineering teams at the BMW Group are using its software to accelerate their vehicle development. By training Monolith self-learning models with the company’s valuable engineering test data, BMW’s engineers are deploying Monolith’s AI to solve complex physics challenges and predict the performance of highly complex systems like crash and aerodynamics tests.

The BMW Group crash test engineering team began working with Monolith in 2019 via the BMW Startup Garage, to explore the potential of using AI to predict the force on a passenger’s tibia during a crash. Current crash development uses thousands of simulations as well as physical tests to capture performance. Even with sophisticated modeling, results require substantial engineering know-how to calibrate for real-world behavior, due to the complexity of the physics underpinning crash dynamics.

Moreover, physical crash tests can only be conducted in later stages of development when the design is mature enough to create physical prototypes. Exploring a more efficient solution, the BMW Group collaborated with Monolith to see if AI could predict crash performance and, importantly, substantially earlier in the vehicle development process. The BMW Startup Garage, BMW Group’s venture client unit, facilitated this collaboration and helped Monolith grow its business relations with the premium automotive manufacturer.
Using Monolith, BMW Group engineers built self-learning models using the wealth of their existing crash data and were able to accurately predict the force on the tibia for a range of different crash types without doing physical crashes. Moreover, the accuracy of the self-learning models will continue to improve as more data becomes available and the platform is further embedded into the engineering workflow. This game-changing approach now means engineers can optimize crash performance earlier in the design process and reduce dependence on time-intensive, costly testing while making historical data infinitely more valuable.

“When the intractable physics of a complex vehicle system means it can’t be truly solved via simulation, AI and self-learning models can fill the gap to instantly understand and predict vehicle performance. This offers engineers a tremendous new tool to do less testing and more learning from their data by reducing the number of required simulations and physical tests while critically making existing data more valuable,” said Richard Ahlfeld, the CEO and founder of Monolith. “We are excited to see how BMW Group engineers are using pioneering technologies like Monolith to reduce the cost and time of product development as they develop the next generation of premium vehicles.”

BMW Group says it is expanding its use of Monolith into more R&D engineering functions that generate vast amounts of data, from crash testing to aerodynamics, motorsport and advanced driver-assist systems (ADAS).